CAREFUL what you wish for...

Lately, I've been feeling a little restless and uneasy, and wasn't sure why.

So this morning (lunchtime), there I was, reading the paper and drinking my tea, when the answer came upon me... the reason I am restless is because I am boring. Not only that, I'm BORED.

All I do is write. And if I'm not writing, then I'm either learning, researching, or somehow trying to advance my career.

That is all fine and dandy since I understood what sacrifices I would have to make in order to focus on my career, but I've come to the conclusion that all work and no play makes Jill (Lisa) a dull girl.

I decided it's time for me to get my groove back and start dating again. Not seriously dating because I truly don't have the time for that, but casually dating would be a blast and just what I need right now.

So I finished my tea with a little "prayer" to the universe asking them to send some excitement my way.

My daughter, Natasha, in a state of absolute hysteria, is on the other end. I gotta tell you, as a parent, you NEVER want to receive a hysterical phone call from your child. She was freaking out so bad, I couldn't understand what she was saying.

All sorts of horrifying possibilities went through my mind while I tried to get her to take a deep breath, calm down and tell me what's wrong.

I finally managed to decipher the words, "something", "in my room", and "please help me!".

WTF? I stumbled over myself asking her all sorts of questions. Who? What? Where? Do you need me to call the police?"

I think my reference to the police broke through her hysteria because she calmed down enough to gasp out that a squirrel was in her bedroom and she needed me to come over RIGHT NOW!

Hopped in my car and whipped over there. (10 min away)

Guess how I found her?

In her room, "geared up" with her rubber gloves and a snow shovel, and frozen to the spot, afraid to move a muscle.

Of course I had to take a picture... here she is screaming at me to "stop taking pictures, and get the fricking squirrel out of my house before it comes all the way in!" 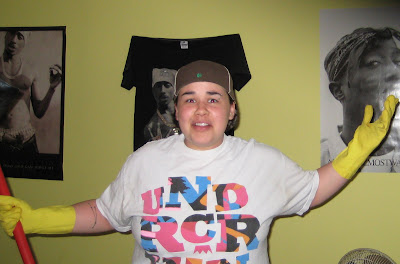 I lifted the curtains, and HOLY SHIT, there it was! 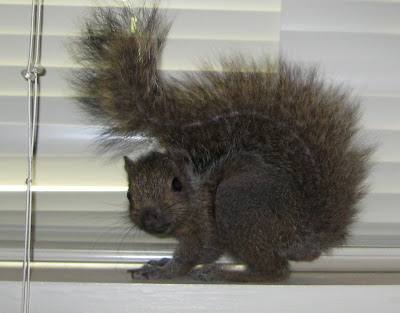 Using the handle of the snow shovel, I tried to gently "shoo" it to the other side of the ledge, where the window was open, all the while Natasha was screaming for me to "Be careful! Please be careful, don't let it get away!"

Unfortunately, instead of heading out the open window like it was supposed to, it LEAPED to the ground and scurried across the floor.

Tash and I both flipped and took off running. So did the squirrel.

That squirrel was a blur, streaking about the house... up the wall, down the wall, across the floor, on the table, on the counter, it even hopped into the frying pan.

While all this was going on, guess where Natasha was? I'll tell ya...

Jumping up and down on her couch, screaming her head off. If the truth be told, I was sort of screaming my head off, too.

It finally tired itself out, and ended up in the kitchen.

Using a long wooden spoon to block it's movements, I managed to get it cornered behind the juicer, while Natasha hollered instructions from the safety of her couch.

"Don't let it scratch you! One scratched Kara and she had to get rabies shots".

Yeah, thanks for that, kid. I'm already scared shitless of the thing, now I get to worry about rabies.

(incidentally, I think something is wrong with my camera -- it was MUCH LARGER in real life) 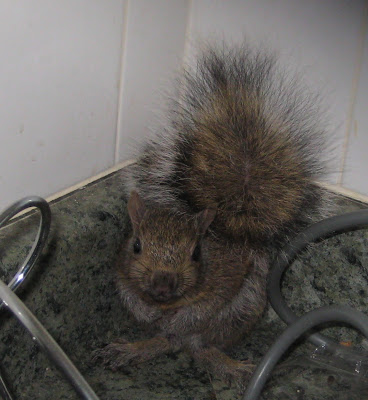 I yelled for her to get me a box and help me... help me she did.

She charges over, grabs an empty wine cooler box from the recycle bin, tosses it in my general direction and takes off back to the safety of her couch.

My plan was to see if I can "guide" the squirrel inside the box with the spoon.

I was scared that if I touched it, it would grab the spoon and use it to climb up my arm and I could just imagine what it would do then. What if it got inside my shirt?

I decided to test the squirrel first, so I, um... poked it.

I can't even believe I am admitting this, but yes, I poked a squirrel with the handle end of a wooden spoon. (just wanted to make sure it wasn't going to run up my arm, remember?)

Guess what it did when I poked it?

It reared up and growled at me. I shit you not -- that squirrel GROWLED at me. I didn't even know squirrels could growl.

Not only that, it grabbed the end of the spoon! I didn't wait to see if it was going to run up my arm, I dropped the spoon and got the hell out of there.

Made it to the safety of the living room, and Natasha was gone. The second she heard the squirrel growl, she took off to her room.

All I could hear was heavy breathing coming from her room, and her saying to herself over and over, "Oh shit, Oh shit, Please, get it out of my house".

I finally snuck up on the squirrel and tossed the box on it, then I wrapped the box, squirrel and all, in a towel and charged for the front door.

And I have to *hang my head in shame* one more time... I confess that instead of placing the box outside gently so the squirrel could walk out, I just tossed the whole package out the door and slammed it shut.

After all was said and done, Natasha and I collapsed onto the couch to collect ourselves... we both sat there for quite awhile, too, traumatized as we were.

Once we both collected our thoughts enough to actually talk about the incident, Natasha got mad. Mad at the squirrel.

More than mad, actually. On the verge of INDIGNANT, talking about "who the hell does that squirrel think it is, anyway? I can't believe it came into my house. That's an invasion of privacy", then she shoots me an extra-disgusted look...

"You realize, of course, that I can never open my bedroom window again?".

Well, I did wish for some excitement in my life, and I guess I got it. What a day!

Since it appears that wishes really do come true, next time I'm gonna wish for... *blushes*... my daughter reads this, so I think I'll leave it at that.

Maybe you should invest in a screen.
Posted by Lisa Purves at 10:14 PM