The Wizard and the Whip!

A few months back, I was floating around Netflix looking for something new to watch and stumbled upon the BBC series, MERLIN, so I thought I'd give it a try.

I liked it. In fact, I liked it so much, I watched all four seasons (sixty-eight episodes) within four weeks! Season five is broadcasting now.

I totally admit that it can be a little cheesy at times and a couple of the episodes were too far-fetched for me, but all in all,  I find the storyline interesting and I really like the writing. Some great dialogue between the characters, especially Arthur and Merlin. I'm into anything set in the age of King Arthur and his Knights of Camelot. Throw in the magician, Merlin, whom I've researched aplenty and believe he was man and not myth, and you get my undivided attention.

Season five, however, (*SPOILER ALERT*) is proving to be a little disappointing. Every week seems to be the same -- King Arthur's wicked sister Morgana plotting his demise and Merlin, using his hidden magic, manages to save him. And no great dragon! The dragon, KILGHARRAH, is my favorite character and he has disappeared. Bring him back, please bring him back!

At this point, depending on what happens through the rest of the season, I might not tune in for season six. I really hope I change my mind!

Anyway, last night, I went to see the movie, FLIGHT, starring Denzel Washington as airline pilot, Whip Whitaker, alongside Don Cheadle, as his lawyer. I thought the film was based on a true story from events that happened in 2001 when a Canadian pilot pulled a heroic landing, but not so much. While the plane malfunction was similar to the actual event, the storyline is fiction. Still, I quite enjoyed it and Denzel's performance was fantastic! He deserves an Oscar nomination, that's for sure!

I plan to take in the flick, ARGO, next. This one is based on a real event and I just know it is going to be good!

... this chick was sucking my coc... oops! Inappropriate. Got your attention though, didn't it?

The real subject of this post is docs as in documentaries. I loves me some documentaries. I watch a lot of them. Foreign, independent, mainstream, crime, historical, biographical, you name it.

If it looks interesting then I will give it a try.

Here are just a few of the many I`ve watched in the past couple of weeks:

(spoiler alert! I`ve posted my thoughts which may or may not give away any twists and turns. If you don`t want to be spoiled, just click on the title to go straight to the IMDb page)

In no particular order:

MURDER ON A SUNDAY

This one truly broke my heart! The poor kid, accused and jailed for a crime he didn`t commit.  I actually bow down to his defense team. Fantastic lawyers and I don`t say that lightly. Btw, it`s an Oscar winner from 2001.

I thought it started out pretty funny, but then about halfway through, I realized what an absolute invasion of privacy it was and well, then I felt like a total fucking asshole for watching it. 'Course, I didn't shut it off at that point but watched it to the end which makes me even more of an asshole.

And, now I`ve blogged about it, so I guess I`m a triple-dog asshole.

Dual footage of a documentary on racism in the south in 1965 and footage shot in 2011 by the original filmmaker`s son. I thought it was very well done and am still sort of dumbfounded that people actually referred to the blacks as ``our niggers`` like it was a favor! Guess I`m a little sheltered in that aspect, being from Canada and all, but damn.

Still, I truly enjoyed it.

This one is Canadian and pretty much paints a picture of a true sociopath. As soon as the subject spoke on camera, I knew there was more to him than meets the eye. Even worse, I was right. In the end, he admits to what his true plans were that day without any remorse or emotion.

What a giant bore-fest! I mean it, too. Snooze-a-rooney. A shame, really. I find ancient civilizations fascinating and I was looking forward to getting some new knowledge about how life really was 20,000 years ago. Instead I got some sleepy orchestra music and silent footage inside the cave. Not what I was expecting at all. However, some people liked it because it sure received a lot of awards, so maybe you will too.

I suppose the paintings were cool.

Out with the old and in with the new!

Long story, but I've changed my domain name. I'm still me, but just with a dash in the middle!

While I was at it, I decided to go through all the posts I've written here over the past five years and delete some of the older ones.

One thing led to another and before I knew it, I went from close to five hundred posts down to twenty-five or so. Lol! Go figure. Must be that I've matured...

Well, in some things, maybe.

If you didn't have a chance to see it last Saturday, check out this pic taken by my dear friend, Tanya, from the beach in Campbell River. Stunning. 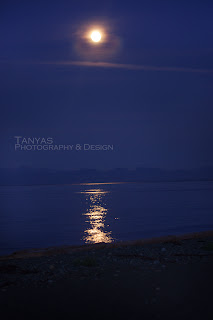 Thought I'd make the move on her while she wasn't looking! (Come on, WHO doesn't feel romantic under a full moon? You would have done the same!) 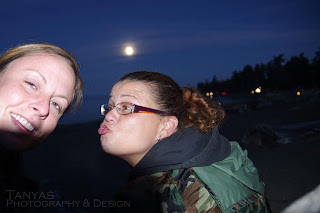 As you can see by the above pic, I'm in Campbell River again. Here's the thing -- I get a lot of writing done in this atmosphere. It's the whole peaceful laid-back island vibe, and I love it!

I'm lucky enough to have wonderful friends like Tanya and her husband (also my dear friend) who own a big house on a big piece of property in the middle of nature AND they actually like it when I stay here. It works out perfect cuz I enjoy their company, too! Plus, I have pretty much the whole back part of the house to myself so we all get some privacy.

Anyway, I got some new plans.

I've spent the last couple/few years on dozens and dozens of our company's sets so I could learn producing from the bottom, up. And I have. I am now familiar with every single aspect there is when it comes to running a production. I've worked in almost every role from crafty/first aid, to transport. I've held bounce boards, I've driven the equipment truck (even the camera truck once, racing beside a porsche -- talk about fun!), dealt with lighting and gear rental, settled L&D claims, done set dec and begged people for favors.

It's been a daring adventure, that's for sure!

The only downfall to my "producing education" is that I haven't been able to spend as much time on my writing as I would like. It's all good, though. I had to sacrifice one to learn the other.

But times, they are a changin'. I am now a confident and capable producer, which is what I set out to become. Yay, me!  One day I'm going to make my mark as a writer/producer. But first, I need to return to screenwriting full time for awhile.

I've decided to (sort of) move to Campbell River to concentrate on my writing through this fall and winter. I say "sort of" because I'll be here from Monday to Friday and will return to my Vancouver home on the weekends to max, relax, and catch up with my pals.

I'll keep you posted on how it goes :)

Whew! Been a busy summer for me, my friends. Spent a lot of time working out of town and arrived home only three days before we went to camera on one of our current projects.

We wrapped that project a few days ago and I've spent the time catching up on all my other stuff that I had to let lag for the past few months.

I'm taking the weekend off, though -- it's hot as HELL outside, too hot to do anything other than laze around or drive to a lake or the ocean and swim -- then next week I'm back on two other projects. One is filming pick up days, the other is editing one of my scripts. I'll tell you about them later. I'm too lazy right now.

Here is a sneak peek on the set of ES2. 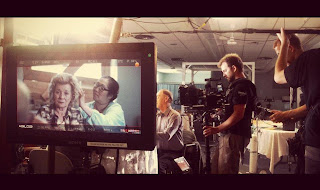 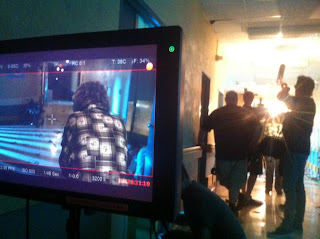 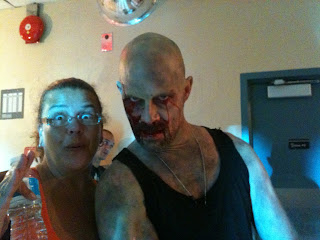 Have I told you lately how much I love being on set? Doesn't matter how long the hours are or how demanding the work is, both mentally and at times, physically, there is nothing like seeing a movie come to life.

Anyway, I've got a pile of books to choose from and no plans in the morning so I'm gonna spend most of the night reading.

Cheers!
Posted by Lisa Purves at 1:17 AM No comments:

KUNTA KINTE IS MY UNCLE

The title of a comedy I'm currently working on. You like? Picture Kevin James trying to land Beyonce by proving he is black.

Among (many) other things, I'm also working on a baseball comedy, SONS OF PITCHES. Think BAD NEWS BEARS if they were old enough to drink.

Both of these projects are ensemble scripts (meaning a large cast of characters) and I've been asked by a few people how I manage to come up with so many different personalities.

Easy answer, my friends! I study real people. (not judge, but study)

People I know, people I come across on the street, people I interact with on the internet and people on Youtube. Oh, and also myself. There is always some part of the writer in every character.

Here are a couple of little gems from YouTube that I studied for the Kunta Kinte script. In the wedding video, about halfway through, take note of the old man in the rose silk pantsuit with the white hat. You'll catch glimpses of him until the end. Beyonce's* uncle's character is based on him. For an old guy, he can sure cut a rug! And in the script, he's also loose with his hands when a woman is around. Any woman. Any size, any shape and any color.

The Kevin* character's brother is an aspiring rap star based loosely on this guy 'cept he dresses better. The character, not the real guy. But he still has the same outlook on life. Matter of fact, he gets along great with Beyonce's uncle ...

So there you have it. Pretty much every character I write is based on something that comes from a real person. It can be as simple as the way they look, the way they walk, the way they react, the tone in which they speak, etc, and the character "grows" from that one aspect until they come to life. Or it could be much more complicated, such as an amalgamation of a bunch of different people.

Anyway, it's Canada Day tomorrow and I'm spending it in Campbell River with some dear friends. We're going to check out the celebrations in town and then the fireworks on the beach!

Hope you are enjoying your weekend as well!

*I haven't given either leads their real names yet, so for now they are Beyonce and Kevin.
Posted by Lisa Purves at 10:51 PM No comments: