Opening my next door... 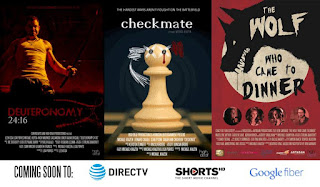 Our small slate of three shorts films sold to The Shorts Movie Channel, ShortsHD on DIRECTV and a number of other providers. All three will be available in the USA and Europe to over 40 million viewers! They're all great films (nope, not bragging - lol) and if you happen to be interested in our work, check them out!

We are all super-happy and I am especially proud because with that, my little short film career comes to an end.

I am a writer first but needed to learn how to produce, mostly so that I could control my own writing. I didn't want to take some boring classes so I jumped into the short film industry to learn everything hands-on. I figured that if you're going to fuck up, which you're bound to while learning, it's better to be on a short film than a feature that has a hell of a lot more $$$ at stake. Good decision, too, as I've made some fuck ups along the way, believe me!

I've worked on many many short film projects over the past five years (although quite a number are not listed on my IMDb page -- sometimes I refuse credits), a TV movie and a feature film, and am confident that I have acquired enough knowledge to move towards my next set of goals!

What are my next set of goals, you ask?

The specifics are personal for now, but they do involve writing and feature films. And also branching outside of Canada!

I'm having the best start to a new year, EVER!

Can't release details yet, but in the past 5 days, one of my films was sold (actually 3, sold as a package, but I only wrote one of them, the others I was a producer on), was informed another has a premiere screening in a couple of months and received the official invite to the red carpet screening of our feature comedy, LAST NIGHT IN SUBURBIA, which is ready for release!