For me, the shit show started at the end of 2019. After a lifetime of rejection, I had decided to call my father one final time for two reasons.

First, because personal integrity forced me to at least warn the man that I was making this documentary so he could be prepared for any exposure he may receive, and secondly, I wanted to offer him the chance to tell his side of the story in my film, if only to make himself look better as a person.

He refused to speak with me -- no surprise there -- so I called his wife instead. She answered and we ended up talking for over an hour. An hour that comprised of me breaking down in tears several times but the conversation ended up being the most healing and cathartic moment of my life, which I didn't realize at the time.

I keep my DNA in a national registry so it can be accessed by any of the DNA kits out there. I woke up on January 1st to an email informing me that I had matched as aunt to a daughter of one of my brothers. I thought, finally, my father and his legitimate children have no choice but to acknowledge me now.

Then, on January 15th, 2020, literally two weeks after the DNA results, my father suddenly passed away. His death brought numerous emotions to the surface for me, emotions I thought that I had already dealt with. One of those emotions was anger. I was really angry at him for dying. I had planned to see my father at the end of this film so I could have my say and then forgive him face to face. My plan was to forgive him for me. Not for him, but for me so I could move forward and leave my painful past behind. His death took that away from me.

I have since done my best to forgive him and although it is difficult to forgive a person who is no longer living, I am almost fully there. And the only reason is because of that phone call with my late fathers' wife.

She put me on speaker phone for the duration of the phone call while my father sat in the background and listened to everything I had to say (I could clearly hear him whispering to her and trying to muffle his cough). At first I was pissed that he had the audacity to listen in after rejecting me so many times over the years, but then I realized that moment may be the only opportunity I would have for him to actually hear what I had to say. I knew there was a chance that he would slam the door in my face when I showed up to confront him at the end of my film, so I took my moment.

And once I started, I couldn't stop.

I told her (and his listening ears) everything I had kept to myself all these years.  How his abandonment affected my life. How his actions affected my self worth and self esteem. How he made me feel unlovable. How, even to this day, I have a hard time trusting men because I am scared they will hurt me. How it is hard for me to trust in the creative talent I was blessed with because I didn't feel it was deserved. How my mom would let me skip school on the Friday before Fathers Day as a kid because I didn't want to make a craft for a father I knew didn't want me. How it made me sick to my stomach when I would see him on TV with his arm around the one child he publicly acknowledged, glowing about how proud he was to be that persons' father.  And I made sure to tell him that parents shouldn't pick and choose which of their children to love and it was his job to be my father but he chose not to care.

I finished by saying that I felt sorry for him. Sorry for whatever happened in his life that made him incapable of loving another person unconditionally and incapable of accepting his responsibilities. I said he should be happy that my mother raised me to be a decent, kind and caring human being and as such, I wasn't going to use any of his past secrets I uncovered against him in my film and I wasn't going to go out of my way to make him look bad. I am just going to tell my truth as it pertains to me.

When I hung up, I felt numb. I couldn't process my feelings so I put them aside for a later date.

That "later date" only came recently, in the past few weeks, close to a year after my father's death when I finally realized that although my father didn't acknowledge me, I did, in fact, get a chance to be heard by him with that phone call.

Which is more that I can say for my siblings. My heart is broken for them as they never had their chance and as difficult as my father's death was for me, it is a lot worse for them. My siblings will never have the closure that I did. And I am going to spend as much time as it takes, the rest of my life even, to help my siblings heal.

My story turned out to be MUCH LARGER than I had originally anticipated. During the course of filming this doc and researching my family history, I discovered that I wasn't the only child my father abandoned. So far there are five of us. All of us DNA tested and proven to be family. And rumors of several more, all of whom I am currently trying to find. Needless to say, my life has changed completely since we found each other and not only have we formed a loving and caring family, their stories are also being told alongside mine in this film.

For the full details, you will have to see the film (which is currently on hold due to travel restrictions but will be completed very soon).

In the meantime, I am so honored and pleased to present my siblings, all of whom I have grown so attached to over the past couple of years and love very much. We truly are a close family unit, made even closer by the similar life experiences and pain we all share.

Aaron, Adrian, Trevor, Paula and myself. 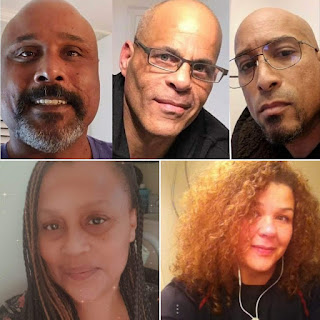 And we have an Uncle. A special giant-hearted compassionate Uncle who has embraced us all and become the patriarch of our little family. His story will also be told in what has become "our" film and not just mine.