Turning the camera on myself is not easy. But for this documentary, it is necessary. 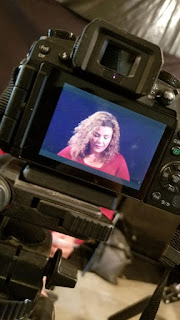 One of the most difficult, challenging and scary things I have ever done, yet also one of the most honest, soul-freeing and healing. I can't hide my true feelings from the camera so you get to see the real me. The painful part that I usually keep hidden.

And the things I have discovered on this cinematic journey so far? You'd have a hard time believing me if I told you...

Thankfully I don't have to tell you because when this project is complete, you can see it for yourself.

Posted by Lisa Purves at 1:33 AM No comments:

And I finally have my documentary title!

A Journey of Healing


“I don’t feel like I have a family name or history that I am connected to. When I was born, my mother didn’t want me to have the stigma of being a bastard on paper so she gave me her ex-husband’s last name, Pinter. I was married for awhile and became Lisa Purves. After I got divorced, I couldn’t go back to Pinter because it doesn’t belong to me. I couldn’t take my mother’s maiden name because her father wouldn’t accept her giving him a black grandchild. I couldn’t take my father’s last name because he refuses to acknowledge me. So I kept Purves, even though that doesn’t belong to me either. When I introduce myself to people, I always say my last name really fast and when they say, Lisa who?, I tell them to JUST CALL ME LISA...”


Started out this doc with plans to have numerous people in the same boat as I, share their stories. Turns out it isn't easy to find people willing to open up their inner pain to the public. Who knew?

Well, someone's gotta do it -- it's the only way to shed light on how deeply being abandoned by a parent affects a person for life -- and my director thinks it should be me.

So okay.
Posted by Lisa Purves at 5:35 PM No comments:

2017 was an interesting year for me, especially in it's final few months. It's a long story so I'll cut to the chase, I'm making my first feature length documentary.

Last year, I was working on an especially deep and dramatic script and in the middle of writing a particularly difficult scene between a father and daughter, I burst into tears. That's not unusual since as a writer, you become your characters while writing so you feel all their emotions, but this time was different. This time, the crying didn't stop for a few months. Until I finally realized that my issue had nothing to do with the script I was writing and everything to do with the painful feelings about being abandoned by my father as a baby.

I started doing research about my circumstance and came across a plethora of information, statistics, papers, interviews, books, etc., about the effects of being abandoned by a parent and in it all, I found myself. Completely, absolutely me and how I felt deep inside throughout my whole life. I also found that I am not alone. Not by a long shot. The statistics of abandoned children and the repercussions of being one are staggering. So staggering that I felt compelled to bring the issue to light.

I put my other projects on hold to make a documentary about abandoned children which will include my own personal story. I'm asking people involved in this documentary to share their own private hell, which includes feelings of shame, humiliation and unworthiness, in a public platform when it's hard enough to acknowledge those feelings within yourself. I can not ask any of them to do something I am not fully prepared to do myself.

I started by telling parts of my story through my social media accounts in the past few months and will tell the rest in this documentary. And if you are curious, yes, it sucks. Yes, it is embarrassing for me, and yes, it hurts. A lot. I liken it to having open heart surgery while you are awake. But on the flip side, I have found such a strength in myself that I never knew existed. I'm well on my way to being healed and I sincerely hope to help others find the path to their own healing through this film.

So let the games begin! Stay tuned for more details :)

And I did have a title, but as with documentaries, you follow one lead which leads you to another until suddenly the story is much bigger than you first anticipated. There will be a title change in the near future.

Happy 2018, all. I hope this year leads you on a path to fulfillment within yourself just like it did for me :)