I've been ignoring this blog for a several months! Was really busy working on various projects. A few months back, we wrapped on the tv series, School of Fish, then we filmed the horror, Madness, then we went straight into pre-production on the feature comedy, Last Night in Suburbia.

Our 15 day shoot of Last Night in Suburbia wrapped yesterday at 7am! Whoop, whoop! Can't wait to see the film when it comes out of post.

Many many things have changed since I last posted here -- our company, High Deaf Productions, is in the middle of a giant revamp. We said goodbye to cinematographer/producer Andy Hodgson, one of our founding members. Andy has decided to take his career in a different direction and focus on music videos and commercials. We wish him the best of luck in the future.

Mike and I are focused solely on film. (well, I am anyway, Mike will still do the occasional music video if he feels passion for the project)

Funny enough, the second I decided to concentrate solely on film, all these film projects started falling into my lap. The old adage rings true -- when one door closes, another door (or in my case, several other doors) open.

Anyway, I have some great news. A few years back, I wrote a martial arts film noir called Deuteronomy 24:16. It got close to production on a couple of occasions, but due to circumstances beyond my control, the project was put on hiatus.

I am happy to report that we are finally going into production on Deuteronomy 24:16 in the next few weeks thanks to executive producer, Sam.

The plan is to have all key roles on the film filled by women. So far, I have brought on Amy Zimmerman as a co-producer, Leen Issa as director and Malin Ottosen as 1st AD.

Me and Sam on the set of Last Night in Suburbia. 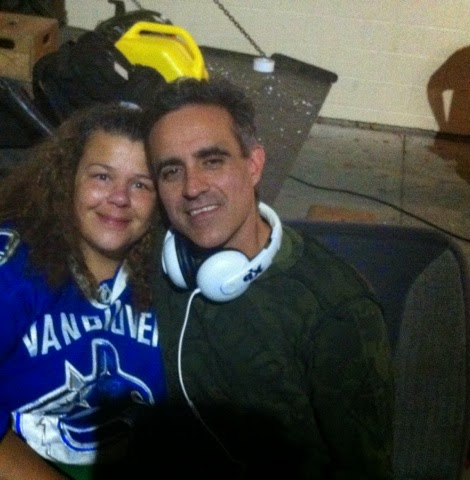